In Bit1 event, the pioneers and best experts of Finnish game industry showed how Finnish game field grew from the Nokia´s Snake Game to a 50 billion dollar industry in just 20 years. They also told what it takes to get there. 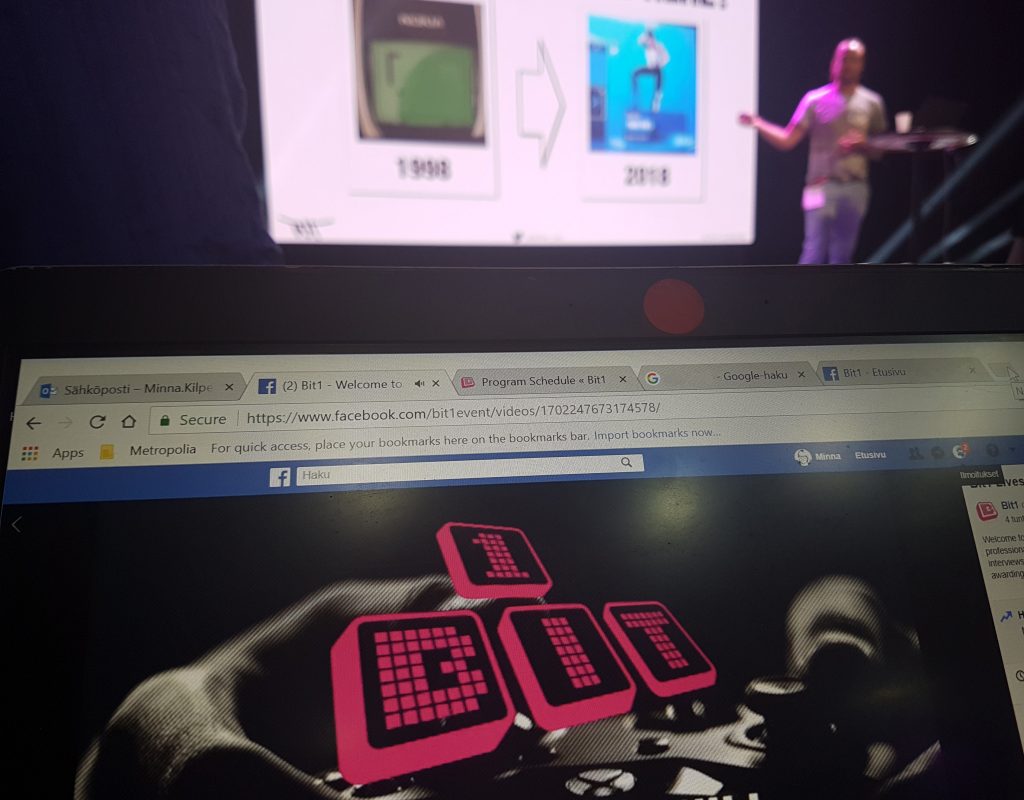 The speakers of Bit1 told about the development of Finnish game industry. Photo: Minna Kilpeläinen.

Game industry serial entrepreneur and investor Samuli Syvähuoko from Sisu Game Ventures and senior consultant Arja Martikainen from Games Jobs Finland gave tips on how to get into the game business, get funded and be a successful game developer in the field.

Mikko Kodisoja, the co-founder of Supercell, told about his path from a small company to decacorn level, and a management advisor of Remedy Entertainment Wilhelm Taht gave us a great overall view about the 20 years history of the growth of the Finnish and global game industry, especially in mobile games.

“It´s a little bit of a pinch yourself moment. This industry started here in Finland 1997 from the hands of a software engineer Taneli Armanto in Espoo”, Taht said.

From a small startup to an enterprise

For Syvähuoko and Kodisoja, it all started with a small group of friends. In the beginning, it was crucial that even between two people, there was enough talent in designing and programming to make a functional game that was attractive for people to play.

Soon when the companies grew it became clear that they had to create an organization that was also functional. In the early 2000´s Mikko Kodisoja founded his second company Sumea which was soon bought by Digital Chocolate. At that time they experienced a rapid growth. 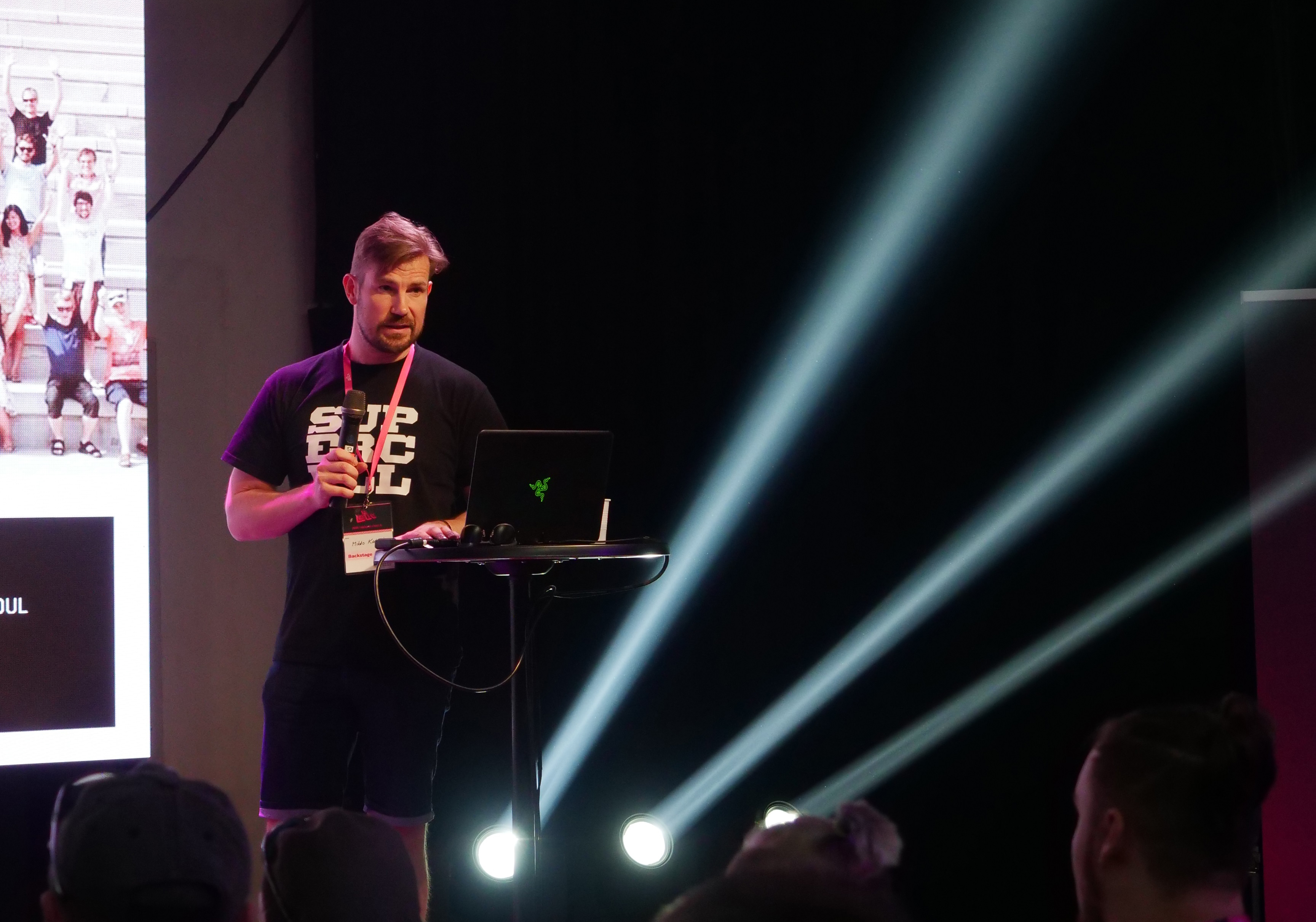 For increasing number of games, they suddenly had to increase also the number of employees from about 40 to 400. But maintaining the work culture of Sumea was difficult. In Sumea they had had a very functional working culture with good spirit. But soon it started to change.

“There was no time to tell about the culture and show how it´s done. The quality went down little by little”, Kodisoja told.

From a director-driven to a team-driven organization

“A logical step is that you start to introduce some structure to the company. We made the traditional oak chart”, Kodisoja said.

“One of the games was called Beach Bikini Babes. That showed how wrong the process was”, he said.

The second phase in their process was having weekly meetings with the board of directors. That wasn´t a very fruitful system to develop good games either.

“Directors had a lot of power and they started to tell the producers how the features should be. They took the ownership from the teams that were developing the game and that led to a situation where we started to lose really good people”, Kodisoja admits.

That was the turning point when they had to start finding another way to organize the processes. They started to give the creative freedom to the teams who were close to customers and knew how to reach them for instance in social media.

“They do all the decisions. The team is the centre of everything”,  Kodisoja told.

They call teams a cell where even only 3 people can work on the prototype. There can be for instance a programmer, a designer and an artist. The biggest cell at the moment in Supercell consists of 17 people. 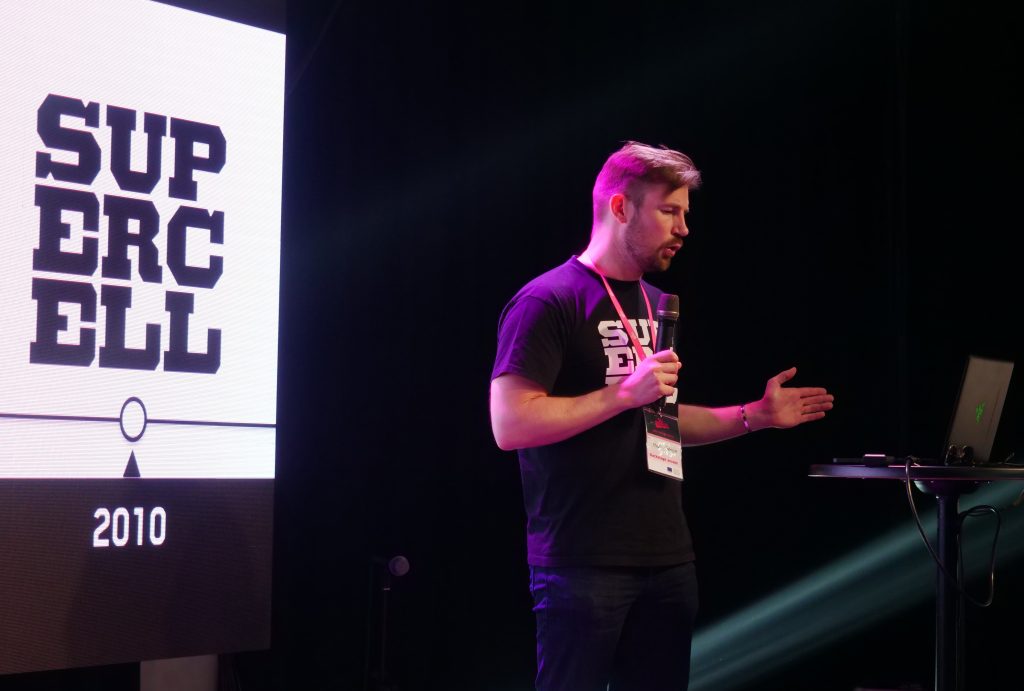 The teams go through the process from idea to global launch where, in the beginning, the teams develop the game just based on their own gut feeling and best guess. After that, they build an alpha version of the game adding more or sometimes changing the people in the team.  After that, they meet the data scientists. Based on the metrics they build the beta version, fix and optimize it and then make the global launch. The whole process lasts about one year and 7-8 months, with the beta phase lasting about a year.

In the game developing process, Supercell kills most of their games. It makes sense because if you don´t hit the top grossing charts, it´s really hard to make it to a game that lasts for decades. Marketing is very hard in a situation where there is one game published in app store every minute.

According to Wilhelm Taht, over the years, Finland has managed to build some of the biggest game brands in the world with two hit mobile games, Angry Birds and Clash of Clans. Marketing and branding paid off.

Clash of Clans made Supercell the first decacorn company in Europe by reaching 10 billion dollar market value in 2016.

Wilhelm Taht showed that it wasn´t until the App store and Android market in 2008 and most importantly free-to-play business model revolution in 2011, that mobile game field really took off. Before that, the business consisted of different subscribing models – some of which even tricked people to use them. There was also an era when you had to deal with different phone operators to get their content. The developers felt robbed when the operators took even 70 % of the revenues leaving developers with only a small portion of them. 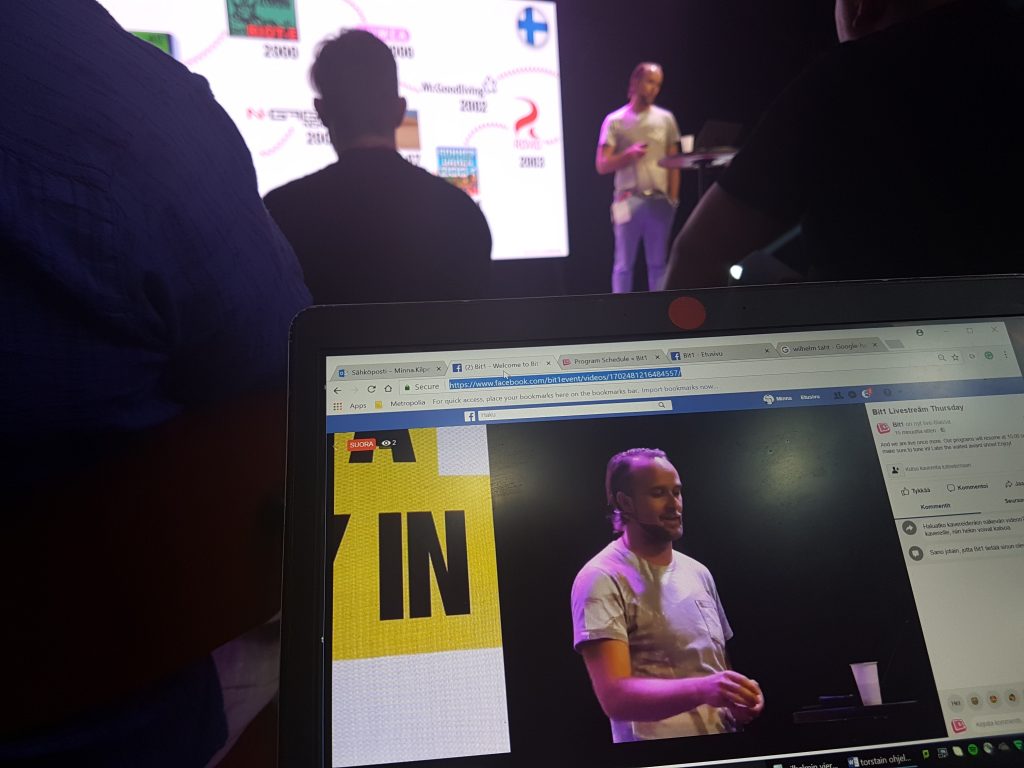 For about ten years ago the developers and game companies started to get a true chance to grow into a billion dollar industry. From 2011 to 2018 it has been a performance marketing era in the game industry. According to Taht, before that it wasn´t possible to do reasonable high scale marketing.

“Now you could be the master of your own success”, he said.

Now it is possible to reach 2,5 billion mobile phone users with low distribution costs. Most users don´t pay for mobile games, but still, the revenue has skyrocketed. That is because free-to-play has really driven the adoption of mobile games in general.

The game industry is huge even compared to other entertainment businesses. When recorded music have got 17 bn revenues and movies worldwide box office 40 bn, the mobile games have reached 56 bn. Video games total is almost 122 bn.

Finnish tradition of equality in the game business 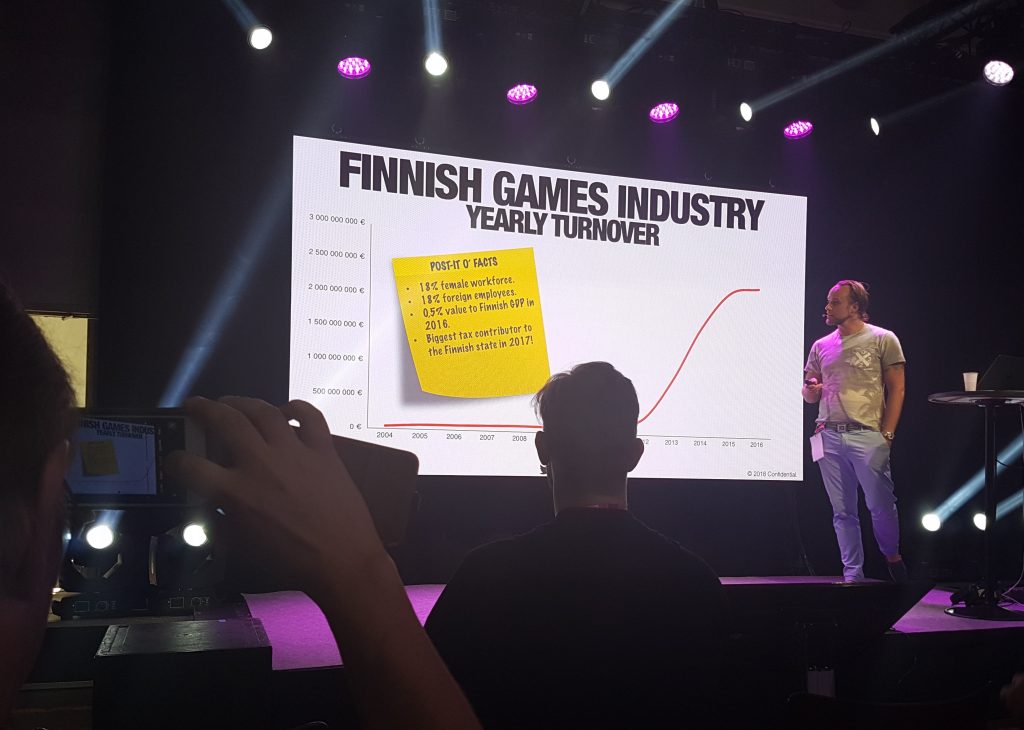 There are 18 % women and 18 % foreigners in Finnish game industry. Photo: Minna Kilpeläinen

In Finland, the game industry is the biggest taxpayer in the whole country with 0,5 % value of the Finnish GDP.

In Wilhem Taht´s opinion, what makes the industry worth looking up to in Finland, is the diversity of the employees. He showed that 18 % of the professionals are women. For the audience of Bit1 it was good news.

“It is much bigger than it is internationally. It´s a sign of mature and good industry. Should it be even more – hell yes! And I love the fact that when we look at this room we see that we have a fairly good gender split. This is really to the benefit of everybody in the room, to the companies and in the end of the day the most benefit to the users.  With this we can create better art”, Taht praised on the stage of Bit1.

Also, the diversity in the nationalities of Finnish game companies is something of great value. 18 % of the employees are foreigners.

The Nordic game industry is something special – and for instance, Samuli Syvähuoko has made concrete effort to level it up even more. 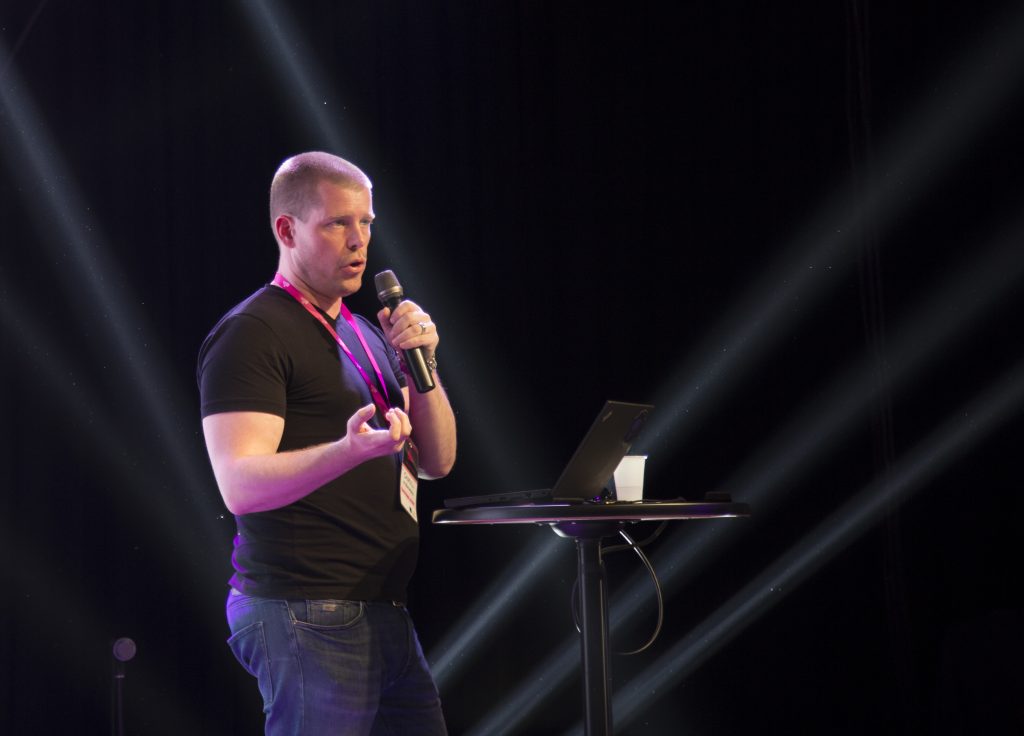 Samuli Syvähuoko is ready to invest in the best newcomers. Photo: Saija Heinonen.

Samuli Syvähuoko knows what it´s like to start a small company with just a few friends. Since he co-founded the legendary Remedy 1995 he has founded four other game studios.

Now, as an investor of Sisu Game Ventures, he looks for new promising game related startups, finances and mentors them and finally – if they are ready and have the true potential to be something big – introduces them to the big boys. This phase can last even five years.

Going from potential to highflyers is rare but possible. Since 2014 Sisu Game Ventures has looked through 300 companies and 26 of them fulfil the criteria of potential companies. Five of them are in the stage of highflyers which are proved to be profitable or done an exit.

In a good company, there should be a good balance between business and art. “I have seen many pitches that are about art, but it can not easily be turned into business”, Syvähuoko said.

According to Syvähuoko, the best ingredients for a successful company are on the teams. When everyone has an entrepreneurial spirit, a shared vision and ambition level and a great chemistry between the people, also the outcome is usually great. Teams should be scalable, flexible and open-minded.

Syvähuoko shares Mikko Kodisoja´s vision about the structure of  a functional company: the ownership should be democratized.

“It should be so that everybody is equally needed in the same business”, Syvähuoko explained. 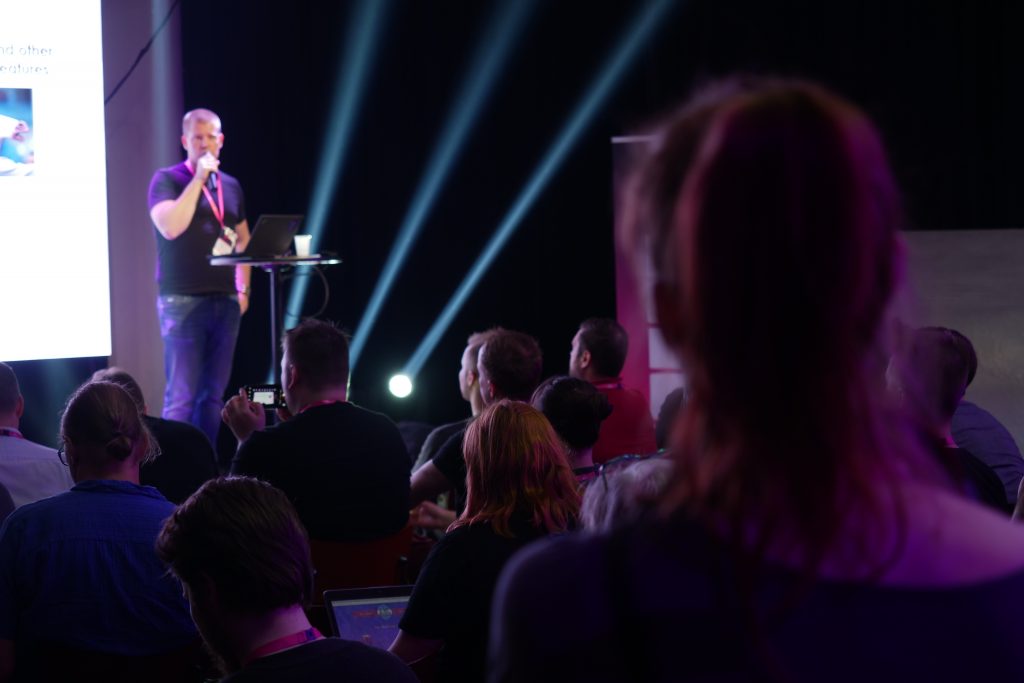 The team is everything in the game business, Samuli Syvähuoko told. Photo: Tuukka Lindholm.

Naturally, the teams also need high skills and experience.  In Syvähuoko´s opinion, more than just core skills should be covered so that the teams can handle game development and beyond. Teams need experience in making games and building companies.

Also very much needed skills to the company are related to HR, operating and IT, finance and legal issues, business development, PR & communication, brand marketing, IP management and merchandising. Syvähuoko prefers teams where there is at least one who owns these skills.

The right candidates to the right places

The employment is somewhat unbalanced in Finland. In some professions, there are too many applicants and in some too few. 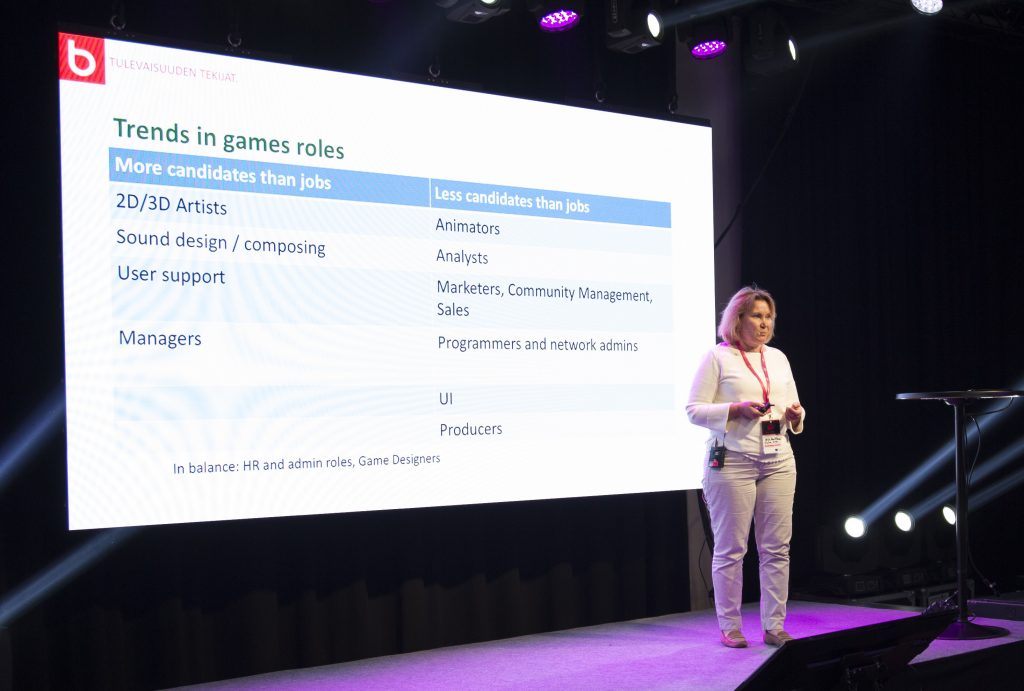 On the other hand, there are too many 2D- and 3D artists, sound designers, composers, customer helpers and managers.

Martikainen advised, that it´s always good to study some more. She told as well, that even if the expectations for the newcomer´s skills are very high, you can still get a job with 70 % of the required skills in the job ad. You don´t always have to be the perfect match.

Martikainen reminded, that what works in the best teams in successful companies, works also when looking for a place in them. Being nice.

“Go to places. Help others. It´s good to help your mates because they might help you later”, Martikainen hinted.