The most prominent thing of the Chips for Game Skills this spring is to find Finland’s best student game. Preliminaries, the PreBits, are now held and the final competition Bit1 is coming soon. The event will take place in Tiivistämö, Suvilahti, Helsinki on 16-17 May.

35 teams applied to hunt the Bit1 Game Award and 30 of them had courage to step in front of the judges. There were 15 teams in Helsinki, 9 in Tampere and 6 in Oulu. Three teams came out of each preliminary. Turku’s two finalists were selected at the Turku ICT Showroom. 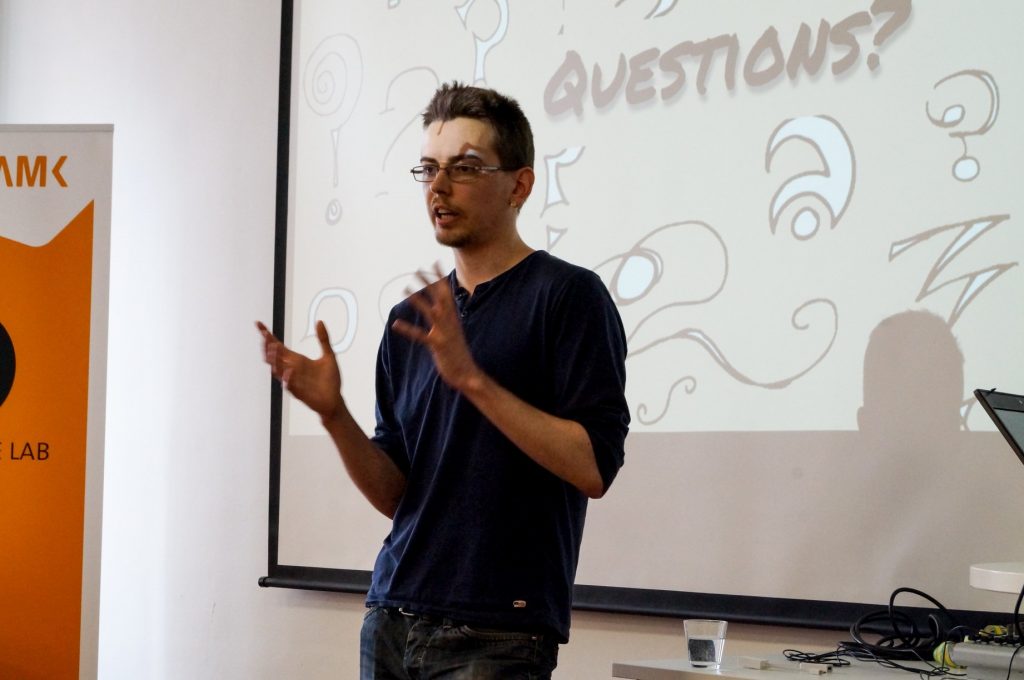 The most prominent thing of the Chips for Game Skills this spring is to find Finland’s best student game. Preliminaries, the PreBits, are now held and the final competition Bit1 is coming soon. The event will take place in Tiivistämö, Suvilahti, Helsinki on 16-17 May.

35 teams applied to hunt the Bit1 Game Award and 30 of them had courage to step in front of the judges. There were 15 teams in Helsinki, 9 in Tampere and 6 in Oulu. Three teams came out of each preliminary. Turku’s two finalists were selected at the Turku ICT Showroom.

The competing teams for PreBits came from all over Finland at the end of April. Representatives were from Oulu, Kajaani, Tampere, Hämeenlinna, Joutseno, Turku and Helsinki. The teams consisted of students from different grades of gaming schools from secondary level to universities. Oulu also included competitors from Pelifarmi. One of Helsinki’s student teams had already set up their own startup. 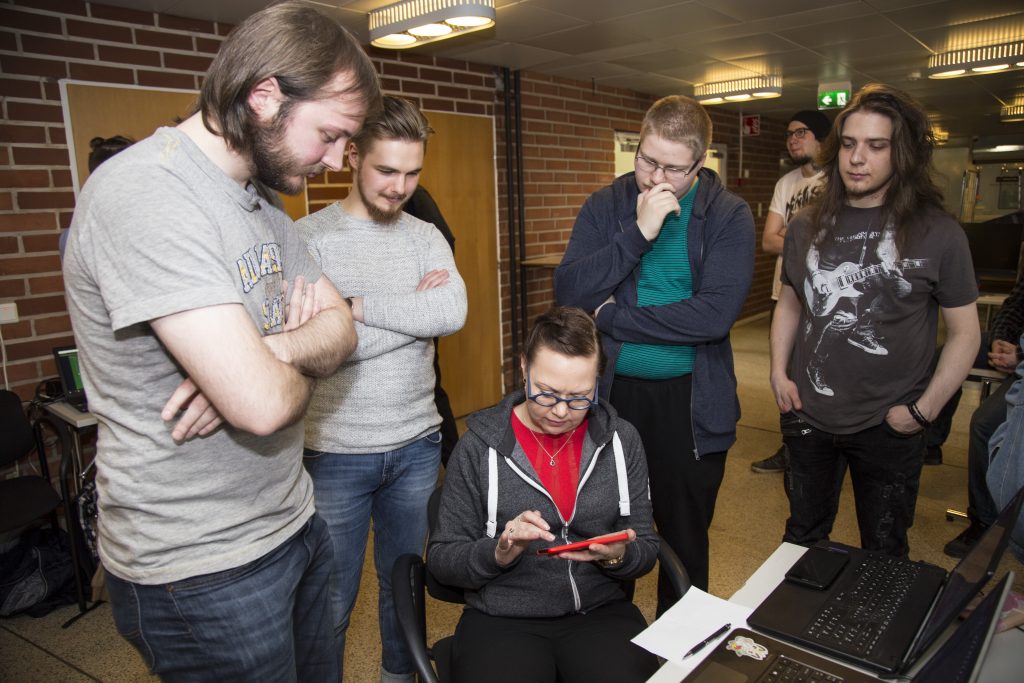 PreBit games were evaluated by hard-core professionals. Jussi Autio (Free2App), John Rantala (Round Zero) and Antti Kananen (Koukoi Games) judged the Oulu preliminary. In addition to the long experience of game design, they brought in views from the perspective of both publishing and economic mechanisms.

The Oulu judges appreciated the teams´ understanding of the market. In their opinion, the winning games were funny, functional and engaging. 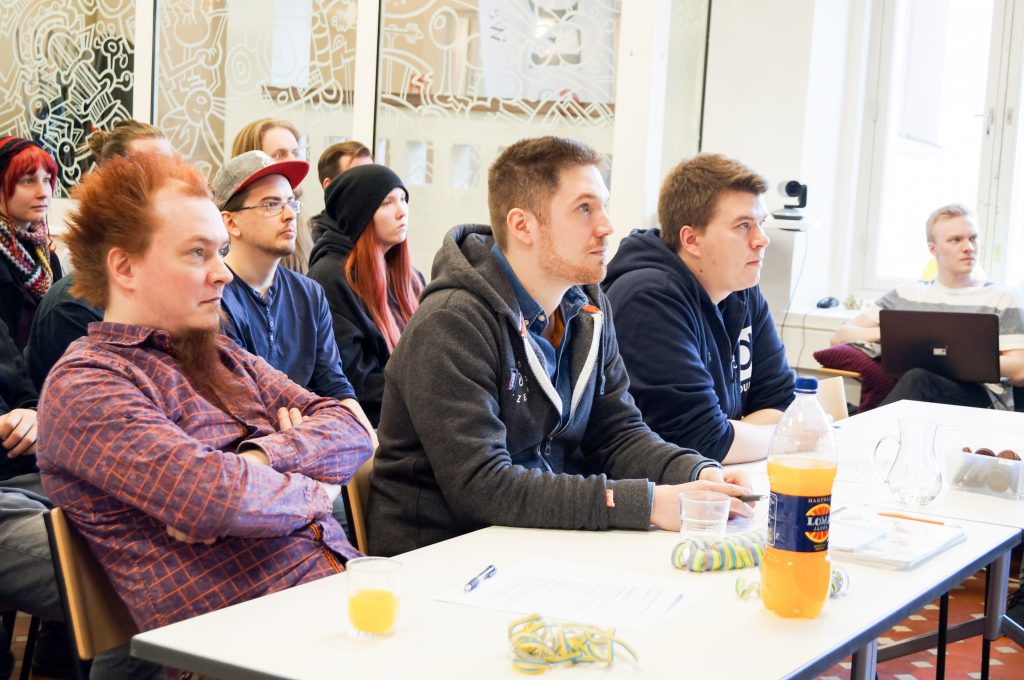 The jury of Oulu is listening the pitchings with interest. Photo: Riikka Savela.

In Tampere, the choices were made by Taneli Lyytikäinen (Bon Games), Niko Mäkelä (Traplight Games), Sami Kojo (Random Potion) and Gareth Noyce (TripleEh?). Their views came, among other things, from deep understanding of gaming development, coding, and quality assurance.

The Tampere judges were delighted with the unique and fun ideas of the games, clarity and functional mechanics. They also saw potential for a viral hit among the finalists.

In Helsinki the judges were Pekka Hänninen (Armada Interactive), Sonja Ängeslevä (Unity), Mikko Honkakorpi (Tigerhat Games / GRX Game Studio) and Jonne Harja (Next Games). The teams got very constructive views from the judges, who had wide experience of game design, monetization, data informed product development and management, among others.

According to judges in Helsinki, the finalists’ games were visually very polished and pleasant to play. They were delighted with the functionality of the mechanics, as well as the fact that the commercial potential of the games had been considered. The judges also paid attention to the teams´ pitching skills. 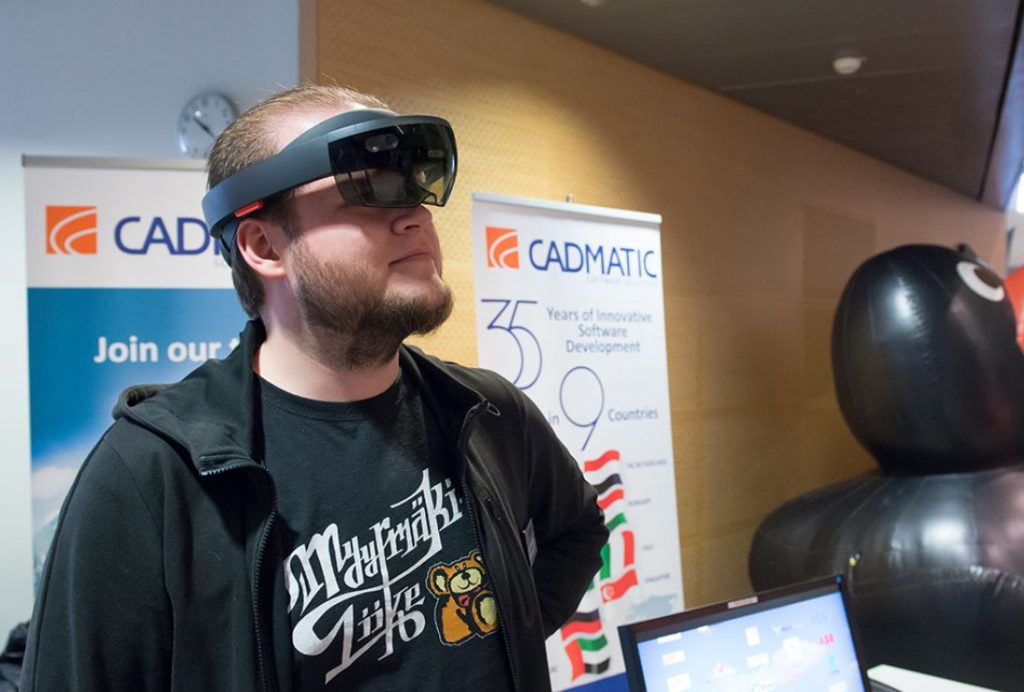 The Turku ICT Showroom’s actual jury chose the winner of the Showroom from a variety of projects from all Turku universities. They also evaluated the novelty value of the games and their monetization and team pitching skills. For Bit1, the games were judged separately by game design experts Taisto Suominen (Turku UAS), Liisa Lehtonen (Boost Turku startup) and Janne Kodisoja (Rival Games Ltd).

In particular, the unity and consistency of the teams and the games and the clarity of the further plans convinced the Turku jury.

Enthusiasm was a nice surprise

The large amount of PreBit participants surprised the organizers. This is the first Bit1, and enthusiasm is very promising for competition in the future, too.

“We first hoped for a few more than ten good games to compete. We also made plans based on that. After all, the we got 11 finalists, which were selected from over thirty games around the country. The result was delightful”, praised Veera Schneider, the producer of PreBit Helsinki and Bit1.

“We hope that people and businesses in the field will find Bit1 event, and can thus see the skill level of students in practice. It’s nice to get feedback and learn from experience from other attendees as well”, she continued.

“I´m delighted about the large number of games and that the event is already getting attention. There is a need for such competition and event. The level of the students´ games is constantly surprising the professionals in the field. That’s why it’s good that with the Bit1 event we can highlight the high level of students´ skills and help them with developing their games and getting employed”, said the father of the Chips for Game Skills -project Juha Huhtakallio.

The participants were also happy with the PreBits.

“According to the discussions afterwards, the participants felt very good of the whole event. Of course, there is still some improvement to be made, “said Toni Pippola, the organizer of PreBit Tampere.

The organizers said that the level of games was varied but, overall, quite promising.

“There were differences in the level of preparedness. Since we were not so precise about defining the level of development of the games, there were those who had developed their games for up to one year when some had only started this spring”, said Anna Salomaa, PreBit Oulu organizer.

“But it was delightful that the games were designed for many different platforms,” Salomaa continued.

“Teams´ levels naturally varied. The game development courses included participation in the ICT Showroom, so all the teams were not so serious about the competition. But I think that the experience in itself taught a lot, and it was possible to benchmark other games and teams”, said Taisto Suominen, the organizer of Turku elections.

“Since the Chips for Game Skills was launched only last November with several partners, I’m very happy that we were able to organize such events, that worked out so well and were this successful. If the game teams didn’t have so much time to prepare, neither did we. Many big projects start slowly, but we started with a bang, and that makes me really proud of our team”, project manager Saija Heinonen summed up.