Game development is teamwork. This series of blog posts investigates elements of teamwork through the eyes of the students. Topics are project management, teamwork, communications, change management, teamwork skills and teamwork development. The CRGP Producers from Laurea University of Applied Sciences are presented in previous blogpost.

Teamwork has become more important than ever. In many companies, there has been a transition from supervisor-oriented leading to team-oriented self-management. For example, at Supercell, the employees work in small teams, or “cells,” of five or 10 people. The teams are autonomous, self-managed and there is nobody to micromanage things. (3)
This kind of teamwork works especially in the game industry where you have different departments for every aspect of gaming. The old-fashioned way of leading doesn’t necessary always work. You have a producer whose job is of course to manage these different departments at a general level, but he or she doesn’t have time to lead every department personally. That’s where teamwork comes in.

You might say that your co-workers of your department whom you like to work with make a nice team, but that doesn’t still make them a real team. As individual workers you might have same goals (make more sales, get more contacts etc.) but you’re not responsible for your co-workers results. That’s the difference: a real team consists of people who share the common goal. They will also share the responsibilities with you, so no-one can blame individual for mistakes. And that goes other way also: individual cannot take credit for the team’s success (2)

Diversity is richness in teamwork and that’s 100% true in game industry. Everyone has their own unique set of skills and no two personalities are alike (2). Still, there are teamwork skills that everyone should have if they want their team to function properly. There are many necessary teamwork skills, but these are the ones that I found to be most important 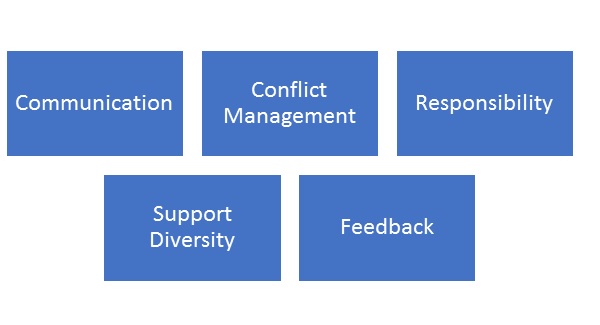 Communication skills are the backbone of the whole team

If there is no communication, there is no progress. Each team member should continuously hone their communication skills. Communication is not only about talking, but also listening and understanding what the other is saying. It’s also important that others understand you, too. (2) There are a lot of people who might lack verbal skills and it might cause problems if one is not able to express their opinion, but they make up for it some other way. For example, the CRGP project has taken Discord in use so you can also write your thoughts out. This way it’s easier for some to communicate.

It’s necessary to be able to solve conflicts among team mates. Conflicts are unavoidable when working with other people, because everyone has their own ideas and opinions. These conflicts shouldn’t affect teamwork and teams should be able to solve any conflict in a constructive manner. (2) We’ve had a few conflicts regarding our CRGP project, but by discussing and listening to everyone we were able to solve our conflicts peacefully.

Ability to take responsibility for your own work is a necessary teamwork skill. Even though working in a team, where people share the responsibilities, one cannot blame others for their  own mistakes. It also works the other way around: team members must make sure that no-one tries to blame others, or there is possibility that it will lower the morale of the whole team. Each member should be committed to do their part. (2) We haven’t faced responsibility issues in our team so far.

Diversity is always richness and team should always be able to embrace that. We are all different but that shouldn’t cause prejudice or rejections. By having a diverse team, you have people with different kind of experiences and unique skills. Diversity also provides new kind of aspects for different topics. (1) If the team is too homogenic, it might create problems in the long run. Team diversity is also linked to team intelligence. Team intelligence means solving different kind of problems by utilizing each member’s experience and skills. It is said that intelligent teams can achieve more than the smartest person in the team could ever achieve alone. This is one of the reasons why teams are usually never made only from one type of people. Supporting diversity requires also an important teamwork skill, empathy. (2)

In our CRGP game project, we’ve been lucky to have a very diverse team. We have students from three different schools and everybody has their unique way to approach and solve problems regarding our game. We’ve had problems in what kind of graphics we’re going to use in our game. We had 2D artists and 3D artist, and everybody wanted to use their skills in game. One of our team members showed a game with 2.5D graphics (2D characters with 3D plane) and this solved our problems.

Sometimes it’s necessary to give and receive feedback, but it needs to be constructive. Constructive feedback improves communication and learning. (1) A good team member is modest person who can receive critique and wants to improve and doesn’t let his or her ego to slow down team’s improvement. (2) I’ve noticed that feedback shouldn’t always be negative, because that can easily lower the team’s morale. People should also focus on giving positive feedback. In our CRGP project, we’ve been trying to give positive feedback whenever someone has finished their tasks.